Customer of the Month – Andrew Sanders 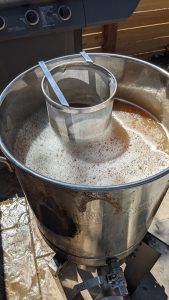 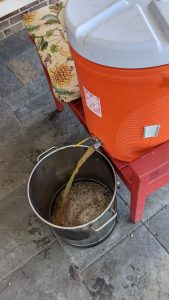 How long have you been homebrewing/winemaking? I’ve been homebrewing for 9 years. I started out on a one-gallon Brooklyn Bew Shop kit and worked up to 5-gallon extract kits. I’ve been brewing all-grain for about seven years.

What are your favorite styles to make? I like to brew & experiment with fun and different flavors and tend to use lots of different types of adjuncts in my brews. Two of my favorite beers I make are an Earl Grey Lemon American Wheat Beer (called a Benedict Arnold Palmer), and a Chai Tea Cream Ale, which goes great on nitro.

Are you a member of any brew clubs or organizations? AHA.

Have you won any medals or awards? I took second in a homebrew competition through Halfpenny Brewing Co. in their fruit beer category. It was a Pineapple, Mango, Citrus Wheat.

Describe your brewing system or equipment: The best way to describe my setup is ramshackle. I use a 200,000 btw propane burner, a 10 gallon and 5-gallon pot, and a ten-gallon mash tun made from a Home Depot water cooler. I ferment in stainless steel fermenters and have a four-tap keg system, which I can convert to nitro.

What piece of equipment or brewing process has made the most difference in your beer and/or wine? My stainless-steel fermenters. So much easier to clean, and much easier to add dry hops and other ingredients to the beer in secondary.

What other fermented beverages have you made? I’ve made wine and mead, but nothing beats making beer.

List of any other hobbies or interests: I run the podcast Pop Culture Brews with my brewing buddy Tyler; each episode we take a piece of pop culture and brew a beer inspired by it. A couple of fun examples are 11% stout inspired by Spinal Tap and Szechuan Pepper Steam Ale inspired by Blade Runner.