Where does Märzen-Oktoberfest Bier come from?

With Oktoberfest right around the corner, we thought it would be a good time to discuss our favorite fest beer, the Märzen.

It is well known that the Märzen is an adaptation of the Vienna Lager. Though there are many conflicting stories surrounding the creation of the beer style. Most historians agree it was originally created by Anton Dreher and Gabriel Sedlmayr around 1840. This is when they began to use lager yeast in their breweries. Some stories state that the Vienna lager was originally introduced by Dreher, while Sedlmayr was making a darker version called Münchner. But Sedlmayr would eventually receive the credit for introducing the style known as Märzen. He introduced it at the Oktoberfest festival through his family’s brewery, Spaten. 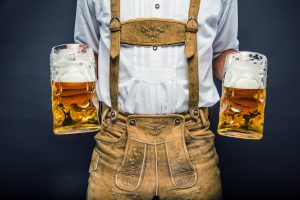 The first Oktoberfest celebration was in October of 1810. It commemorated the marriage of Crown Prince Ludwig I of Bavaria and the Princess Therese of Saxony-Hildburghausen. Since then, the festival has become the largest festival in the world with more than six-million people attending every year.

There are very strict guidelines of which beers can be sold during the festivities and is considered an Oktoberfest bier. Only beer that conforms to the German purity law Reinheitsgebot can be served at the festival. The beer must also be brewed within the city limits of Munich and have a minimum of 13.5% “Stammwürze” (approximately 6% alcohol).

What is a Märzen

The term Märzen which means “March” was not originally a style of beer, but instead it described the way in which it was conditioned. Because there was no artificial refrigeration during this time, brewers would make the beer in the month of March. They would then condition it in cold caves throughout the spring and summer. The beer would then be ready to be served in late September.

The Märzen can vary in color. Domestic German versions tend to be light golden. Common exports and “fest” type beers are typically orange-amber in color and usually a bit stronger. The one thing that distinguishes the Märzen from other German lagers, is its rich smooth malt character. When making it, brewers utilize only the finest ingredients available using mostly Munich malts along with noble variety hops.

The beer is traditionally brewed using a multi-step mashing technique called decoction. Decoction mashing involves removing a portion of the mash, boiling it in a separate vessel, and then returning it to the mash tun. This is done to increase the mash temperature without needing to add additional water. One of the benefits of decoction mashing is that it also increases melanoidins which accentuate the rich malt character that is so common in this beer style.

Here is a very simple extract version of a Märzen-Oktoberfest Bier.

Using a grain sock; steep specialty grains for 30 minutes in 150-155°F water. After 30 minutes the grain and bag can be disposed of.

Turn off the heat and slowly pour the malt extract into the pot while stirring. Turn the heat back on and bring to a boil

During the 60 minute boil hops are to be added at the following times. Note that times indicate minutes left till the end of the boil

Allow the wort to cool to below 80ºF. You can use a wort chiller to hasten this very important step! Also be sure that anything that will come in contact with the chilled wort is properly sanitized. Add the chilled wort to a sanitized fermentor and add additional water if necessary to bring the total volume up to 5.25 gallons.  The proper temperature in which to pitch the yeast and to ferment the wort for this yeast strain is 54º-60ºF. If necessary, place the fermentor into a cold or warm water bath to adjust the temperature. When the temperature is correct, aerate the wort then pitch/add the yeast

Allow the beer to lager for approximately 4-weeks before bottling or kegging.

For additional information on Märzen-Oktoberfest Bier, please reach out to the staff of The Brew Hut.